We arrived after an easy day trip from Lunenburg and we were so pleased to see that we would be docked right in the heart of the downtown Halifax waterfront. In fact, just before we left, Chip, a great friend of ours sent us a clip of Jack jumping up and down on the boat deck that he filmed from a waterfront webcam located just off our swim platform on the roof of the maritime museum. Halifax is the second largest non-freezing harbor in the world (Sydney, Australia is the first) and it has one of the largest boardwalks with walkways spanning the entire downtown area adjacent to the lovely harbor. In addition, the Halifax downtown is connected by the world’s oldest ferry system in place since the mid 18th century when an enterprising young man connected Dartmouth to Halifax with his row boat paddling 4 hours per round trip carrying just 2 passengers each direction. Currently the harbor is traversed by a nearly continuous stream of modern ferry’s connecting 3 cities. Alec, Jack and I road our bikes to the ferry building and for $6.50 Canadian we were able to cross over, ride our bikes on the bike path to another city, have dinner and connect for free with a ferry heading back to Halifax.

A brief overview of the week in Halifax included a trip to the maritime museum, several bike trips, lots of dining out, a trip to see the low tide and walk the ocean floor at the Bay of Fundy,(one of the 7 wonders of North America), a day trip to the lighthouse in Peggy’s cove – a really sweet waterfront town with less than 300 residents but with a continuous stream of tourist busses arriving nearly hourly to see the lovely town, lighthouse (one of the most photographed in the world) and granite rocks breaking the crashing waves from the town which were left behind by retreating glaciers eons ago, and a several times a day trip to the “Wave”, a huge granite structure which Jack loved to climb and slide down.

Hearing of the Royal Nova Scotia Yacht Squadron and its storied history as well as protected (and more private) accommodations than we have been enjoying in the heart of Downtown Halifax, we opted to try that out for a bit and after a short 6 trip we moved Gratitude and April K. What a treat staying here was! In addition to watching the twice daily march of Opti’s carrying young children out for the their daily sailing lesson, the Yacht Club couldn’t have been any more welcoming. We found a long term employee who recommended his daughter for a night of baby sitting and Alec and I enjoyed our first date night in 2 months and to a one, each person we encountered was more genuine and kind than the last. Unfortunately we couldn’t get Jack in for sailing lessons but as we have decided to extend our stay here until Tuesday of next week, Ill try again on Monday to see if they can squeeze him in.

Our time in Halifax has been amazing. Today has been a lay day getting the boat spic and span and a few things in the larder for what was to be a departure tomorrow for a couple of days of cruising but we have since decided to delay for a couple of days to wait for smoother weather. So since we are staying if the weather permits, the one thing remaining on my list of things to see here was to take the dinghy to McNab Island and ride the bikes and have a picnic. In the meantime, today we are laying low and just getting caught up. Most of the boats that we are traveling with have already begun the trip to St. Peter and the Bras D’Orr lakes which is next on our itinerary. What is so great about this type of travel is that we can move at our own pace seeing and staying as we wish. Getting to Maine was a bit hurried in our itinerary as we had plans to meet family at nearly every stop but since we have left Maine, it has been far more relaxed with us all just deciding day by day what to do next. In fact, what we do after Bras D’Orr is still undecided. Considering Newfoundland, Prince Edward Island as well as the possibility of visiting some French owned islands in the region.

Hope you are enjoying the last few weeks before the beginning of the school year! We love you all! 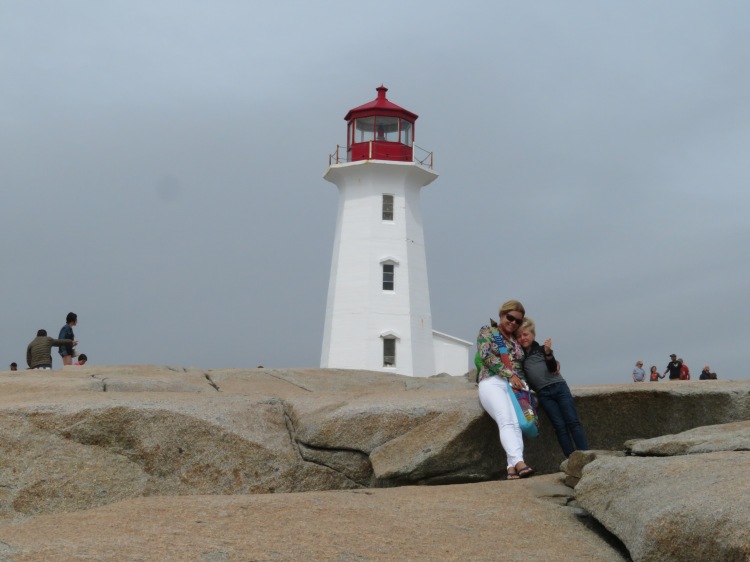 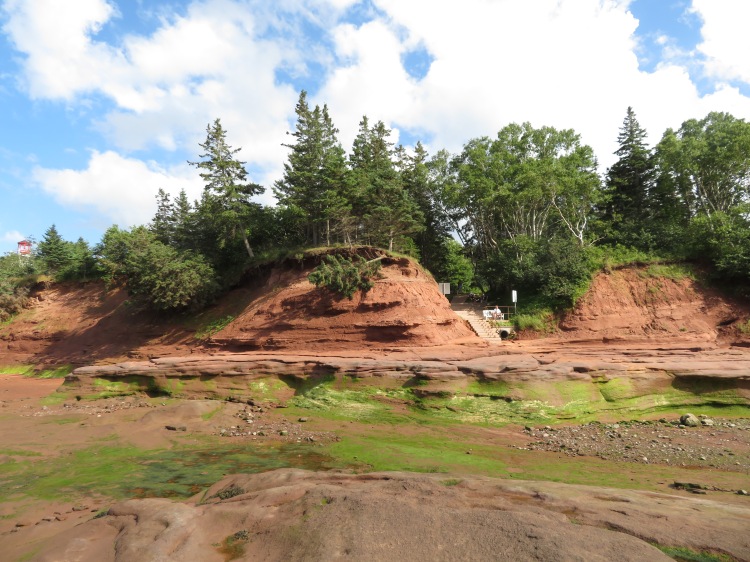 Note the sign on the wave 🙂  Clearly there only to keep the lawyers away but kids were up and down this thing all hours of the day and night!  Its really quite deceiving and is larger than it appears.