We left Maine nearly 2 weeks ago and we have had tons of fun since that departure. We had a 33 hour passage from Maine to Lunenburg, NS and had beautiful weather for the entire trip. We were really able to identify several differences in our marine habitat on this trip vs. our previous Southern cruising. Alec and Jack both saw a whale, we all saw seals, I saw an eagle while enjoying an elliptical workout on the fly bridge and the numerous pods of dolphins we saw were a much smaller size and totally different than the ones we are used to seeing back home. Additionally, what Jack thought was a shark with two distinct fins coming out of the water and hovering near the surface turned out to be a sunfish. None of us had ever seen one before and Paul (our cruising buddy boat) thought they didn’t come this far North but further research indicated that in fact, it was a sunfish. Some of them can get as large as 2000 lbs. We have heard from some of the local Nova Scotians that their fishing industry is undergoing a drastic change. They have largely overfished and completely decimated the cod population but lobster has taken over as a large fishery industry. Due to the warming ocean temperatures, lobster which never used to come this far north are making the trip and sharks too, also never used to migrate this far north are also making an appearance. Strange to see such dramatic changes to a fairly stable ecology in ones own lifetime but it is what it is. Ill refrain from voicing any opinions as to the cause due to the varied political views of the very limited readership 🙂

So we arrived in Lunenberg, NS – Itself a UNESCO heritage site and clear to see why this adorable city has earned worldwide protection. Once a fishing village, the homes were built with very distinct characteristics – the widow’s walk where the wives would patiently pace awaiting the return of their husbands from “work” – additionally many homes had a 5 foot porch for the same reason. There was a monument to the many lost fishermen and their boats and throughout the town of brightly colored homes and businesses it was clear the impact that the fishing industry has had on this town. During some fishing seasons, an entire town of men old enough to fish could be lost do to the punishing effect of weather and reef. Deadliest Catch indeed right?

Alec has continued his quest for tastiest lobster and we found a fantastic bike/walking path not far from town where all 3 of us enjoyed an afternoon of biking.

We had a cocktail party for 12 fellow Nordhavn boaters who are all in town together and are forming the very loosely organized Canadien Maritimes cruising Group arranged by Milt and Judy Baker (Bluewater). It was lots of fun getting to know everyone and we have truly found “community” together while all of us are so far from “home”.

On July 19th we left Lunenberg to continue our trip East – next stop Halifax, NS. 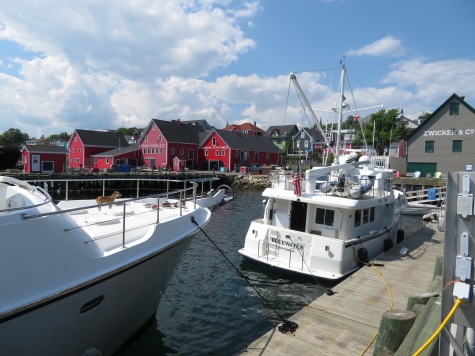 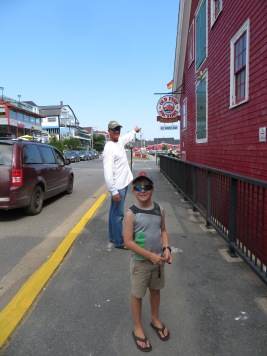