Im paraphrasing a friend who posted on Instagram yesterday that he could remember the time when he doubted his abilities – doubted his dream of becoming an orthopedic surgeon. He went on to say that essentially the antidote to that doubt was to do “one small thing” in pursuit of the dream. What a powerful thing that was to hear because as I sit here in Ireland living the result of this huge dream that no one could argue was the result of Alec and I continuously and daily putting one foot in front of the other in pursuit of the dream – and sometimes “doing one small thing” was as simple as reading the blog of someone out there doing it – I am overcome with doubt that I have the will, the knowledge or the ability to home school our child. A new dream, a new goal, a new challenge.

Also yesterday I read that to become basically proficient (not fluent) in Portuguese all we must do is spend 15 minutes per day for the next 80 days. One small thing – but over the course of 80 days, we should be able to order dinner when we arrive in Portugal and get directions to the shop that sells 9V batteries – and I will have taken one more small step towards achieving a dream of having an educated home schooled child. I have read a few more chapters in Charlotte Mason’s bible of homeschooling and bought a few more “quality books” to arm ourselves with at least a few more tools and Ill finish just one more short 15 minute class on Portuguese after I finish this blog. One more small thing… so now you know what is weighing on me most this week…

But back to Ireland! We arrived just 1 week ago after a perfect and uneventful 6 1/2 day passage from the Azores. We left with marginal seas but the trade off was marginal seas initially with a longer period of predictable weather on the other side. This is a trade off I choose routinely. Safe but uncomfortable ALWAYS trumps the unknown. We love having the professional services of the weather router. I really thought that once we got better at predicting our own weather we would do so but to be honest, this is likely to go into the budget as a line item for any passage involving more than a couple of days. The truth is that while we are decent at looking at weather and interpreting what will happen next, we aren’t professionals and this is something that we really need to get right. We availed ourselves of this service the entire crossing and Commanders Weather did a magnificent job literally giving us coordinates to navigate to which would thread a needle between 2 areas of low pressure. We could simply not have done this on our own in the mid-Atlantic and we wouldn’t really have wanted to try. We were at sea for 23 days and in that time we only encountered less than PERFECT sea state for probably 4 days. It was for that reason that when Commanders Weather suggested another week in the Azores, we didn’t think twice about it. There were several boats leaving for Europe that day but we opted to wait another week and we didn’t regret it. Such is life when you are retired and on no schedule anyway right? Especially with Jack aboard. Speaking of Jack, we had been told by a few people that we should get some Stergeron for sea sickness now that we were outside the US. Most of us had been using the Scopolamine patch and had been enjoying good enough results but Jack can’t take it as it isn’t prescribed for minors. We got the Stergeron and cut it in 1/2 for Jack. We left the Azores and all of us felt crummy once we passed the lee of the islands. The Azores are made up of 9 islands – Horta is a part of a grouping of 5 islands and they all seemed to provide nice seas until we got around the last of them and started making a path for Ireland. Then the ride deteriorated over the next 12 hours. Jack had the Stergeron and did magnificently – no sea sickness whatsoever and he had no side effects at all. Poor Sally – ironclad tummy that she has, got sick. I felt lousy even with the patch – so did Alec and Michael. Several days later after being advised by Commanders to expect a worsening sea state (6-8 foot seas with 4-6 seconds) we all took the Stergeron and we all felt fine in the worsening sea conditions all with NO side effect. If you are outside the US and you can get some – Stergeron is the bomb!!!!

Also on that day we had a record number of whale sightings – no less than 14 with a large whale doing a dive just to port and another whale LITERALLY going under our bow! She came from the Starboard side, went under the bow and came out the port side mid-ships. We had hundreds of dolphins come to visit us and we have tons of footage.

If I can get a youtube video up I will do so because not only are the dolphins jumping and playing in the Gratitude bow wake, they are squeaking and talking so much it was extraordinary! On this leg we had only Sally, Michael, Laurie, Alec and Jack so we all had more watches than before. Sally and Michael were an incredible help to us keeping 2 full watches per day per person and Sally fixing dinner while I was on watch – again, the pre-cooked meals are absolutely the way to go here!!! With only 4 of us on a watch we needed more hands on deck but we worked incredibly well together.

Arriving in Ireland – to say that it was an amazing feeling just wouldn’t do it justice. You can all pretty much imagine what this was like. Following the stunning Southern Coast of Ireland we were escorted the entire way by dolphins. Hours and hours of dolphins… Then…

We were hailed by the Irish Navy:

And then we were hailed by the Customs and Border Patrol. The customs folk boarded us as we were headed to the dock and had all of the required paperwork completed before we even had the lines on the dock! The easiest clearing ever in the history!!! This was particularly helpful as Sally and Michael had a booked flights out in 4 days so they wanted to hit the ground running to see as much of Ireland as possible. So it was with mixed feelings we said so long to our wonderful and amazing crew who were with us from the first – Sally and Michael Hastings. You guys were amazing and wonderful and the list goes on and on… We are so incredibly grateful to you for accompanying us on this adventure. It isn’t everyone who could live with us for 50 days in 64 feet of space but you guys did it with patience and tolerance and we so very much appreciate you both.

So 1 week ago we landed in Kinsale, Ireland and in that week (after doing 1,000 loads of laundry and answering a million emails) we got caught up on boat chores, we have tried out 1/2 of the bakery’s in town with several more to go. We have walked to James Fort built in 1602 and Charles Fort built in 1678 – both very cool destinations a short walk from Kinsale but across the harbor from each other. Yesterday we took the bus (1 hour away) to Cork and did the city tour there. Kinsale, Ireland is a charming town filled with little shops, restaurants and pubs. There are lovely flower boxes and wild flowers everywhere. Dripping in charm. Cork is a little like New York City. It has lots of shopping and great restaurants but a little too “big city” for our taste. Happy to get back to Kinsale, we are making our plan for our Northern trek. The plan is to find the right weather for our Western passage along the South coast of Ireland from County Cork to Country Kerry and the Dingle Peninsula. Im sure we will stop along the way but Im not sure if it will be Lawrence Cove, Baltimore or or further North. The weather will play a huge part in this – its not called the “WILD ATLANTIC WAY’ for nothing. We are going to make our way North on the Western Coast following the famed Wild Atlantic Way but not certain which stops we will make.

We have a reservation (made several months ago and the first one available) to go out to Skellig Michael. This is a spot of amazing sea bird migration and may include puffins – the tour books say until early August. The huge claim to fame recently is that it is the site of the filming of The Last Jedi and it is a UNESCO heritage site but it has become so popular reservations are nearly impossible to get and the only reason we have them is that Jennifer Hamilton on Dirona suggested we do this several months ago. The Dirona blog is one that we follow and is a tremendous source of information and Jennifer has been incredibly generous sharing her wealth of knowledge with us. But back to Skellig Michael, There are 2 islands, Skellig Michael and Little Skellig the later which is mostly impossible to board. The history of the Skellig islands dates back as far as the early pre-Celtic tribe in 1400 BC but more “recent” history dates with the occupation of Skellig Michael by early Christian monks in the 600-800 centuries. There were numerous Viking raids on the monestaries yet many of the bee hive like structures remain. There are some 700 stone steps to climb to the top to view the monasteries – we haven been hoping that it isn’t too much for Jack. Mostly though we are excited to view the seabirds who make Skellig this honeymoon haven of choice (the nesting seabirds who visit only to hatch eggs) include Puffins, Guillemots, Razorbills, Fulmars and Kittiwakes and only stay until their chics are 6 weeks old at which point they must fend for themselves – the entire group of birds then flock back to sea as if by unanimous decision. It is our fervent hope that they are still there when our tickets allow us to go – July 30th. Due to the fragility of this site, the number of visitors is carefully controlled and due to the difficulty in approaching – any weather at all makes this impassable roughly 2X per week. Pitty the pour souls who tickets in hand get cancelled at the last moment with no chance of seeing the islands on their visit. Long story short, the Skelligs are on the South West coast so we will likely have to drive here or take the bus or train since waiting here until the 30th with cause the loss of so many other sites.. I hope that we will be approaching Scotland nearing the beginning of next month. 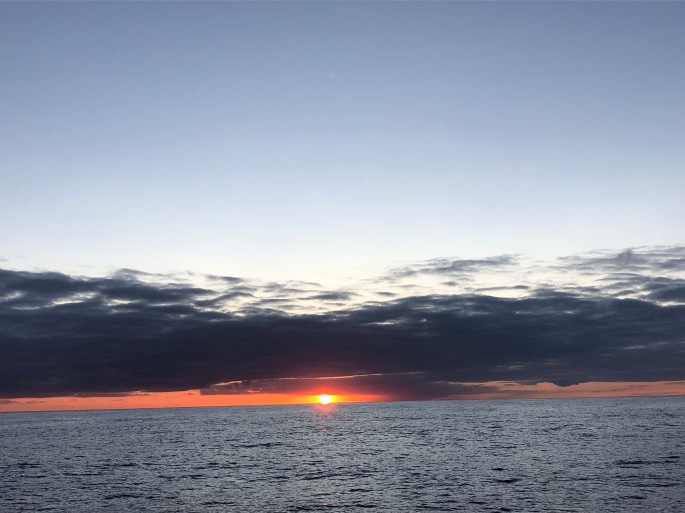 Well, thats all for now. Thanks again to Sally, Michael, James, Bernie, Elizabeth and Janie who all helped us so much in the realization of this magnificent adventure. You guys are the best! and we love you tons!!!

7 thoughts on “The Crossing is COMPLETE!!!”