So much has happened since our last posting – I hardly know where to begin! Right now we have just departed Mystic, CT and we are traveling up the Long Island Sound headed West. Our destination today is Oyster Bay where we hope to spend the night at anchor and leave in the morning. Tomorrow the plan is to travel through the East River passing Manhattan and cruising under all of the bridges that for years we have flown over. For as long as I can remember it has been a bucket list item to pass under these bridges in our own boat, passing “Lady Liberty” close enough to see her, while under our own steam. If all goes as planned, tomorrow we will have that chance. We will be dodging ferries and hopefully NO USAIR airplanes as we make our way past Sandy Hook and down the New Jersey Coast into the Delaware Bay – then through the CD Canal and into the Chesapeake. Below I have cut and pasted a map of our trip over the next 2 days. Keep in mind we only left the Mystic River in CT this morning. We are traveling at 8 kts.

At the risk of bouncing back and forth too much, when last we posted, we were on our way to Onset, MA where we planned to wait out the storm. We were also awaiting the arrival of Janie and Elizabeth, two friends who were planning to visit us in Martha’s Vineyard. Since we were uncertain of what the week’s weather would bring, we changed the plan a bit and delayed our arrival into MV, preferring instead to have Janie and Lizzie meet us in Onset. They did both arrive on time but Lizzie, not feeling well, departed and went back to Miami. What a trooper to have even gotten on the plane to MA feeling so lousy!!! We had a fantastic evening and short cruise the following day to MV enjoying a lovely lunch on the fly bridge and perfect weather conditions for the short 3 hour trip.

Arriving in MV just in time for dinner, we found the ever popular (and nearly synonymous with MV) – Black Dog Tavern. Janie treated us to a wonderful meal overlooking Vineyard Haven and we enjoyed a nice ice cream treat while walking around the town. Having lost a few days of our original plan of a week here, we hit the ground running the next day and walked to Oak Bluffs, took a bus to Edgartown and had a terrific lunch there followed by shopping and a trip to the book store. It is amazing to me that the conversation about Chappaquiddick continues today and there was an author of a newly released book Chappaquiddick Tragedy giving a talk at the local book store. For those unfamiliar, Chappaquiddick is a tiny island to the East of Martha’s Vinyard which is served by a constant small ferry from Edgartown. Janie and I couldn’t resist but the boys went for more ice cream giving us time to enjoy the lecture. We stopped in Oak Bluff on the way home to participate in a festival there and then we walked the couple of miles back to the boat. It was a super fun day. The next day we took the bus in the opposite direction to the cliffs and lighthouse on the Western most point of the island.

Leaving MV we traveled for 10 hours to reach Mystic, CT. If Im totally honest, I could have given up the trip to MV and spent another week in Mystic. We only had 3 or 4 days there but they were non-stop adventure, fun and learning. Just down the Mystic River and two very cool bridges later, you will come to the Mystic Seaport Museum. This “Museum” is located on the river and it completely depicts a mid 19th century whaling village. There is a fully functional boat yard which is currently in the midst of a 2 year project to restore the MAYFLOWER II just in time for the 400th anniversary of the Pilgrims’ landing on Plymouth rock. On our first trip to Onset on the way north, readers of the blog will remember that we visited Plymouth and were disappointed to discover that the Mayflower had been moved for renovation. Not to be deterred – the plan was set in motion to see her in Mystic. She is 1/2 way through her renovation and we were able to see it happening live! One of the very cool things about this boat yard is that it is not only fully functional but it is also open to the public. At all phases of the renovation, guests are free to interact with the artisans carrying out this beautiful work. The Mayflower II was a gift to us from England for our role in WWII. It was built with an effort to, as closely as possible, depict the original ship and here at the Mystic seaport, the carpenters and boat specialists are carefully replicating this process, using only those tools which would have been used initially if it is on a piece that can be viewed. Not only is the Mayflower II here, but having just visited the Whaling Museum in New Bedford, MA, we learned all about the Charles Morgan and the important history of “Whaling” in not only our country but also world wide. New Bedford is called the “city that lit the world”. Back in the mid 19th century New Bedford was the whaling capital of the world. Their ships and crew would leave port for 3-5 years at a time traveling the world fishing for whales. The whale oil would be extracted at sea and large casks filled and placed in the hold. The Charles Morgan is a ship built in 1841 and housed here at the Mystic Seaport Museum. Below is a picture of her and just behind and to the right you can make out our boats. The very cool thing is that after the gates are closed and the last visitor departed, we remain free to roam the “streets” of this 19th century village.

Other highlights of the week included being given a private tour of the incredibly vast collection of artifacts and valuable boats, motors, scrimshaw, art, and even silver. So comprehensive is this collection it includes over 400 boats, many with 1/2 models, log books, photos and artistic renderings of the boat and relevant awards if any. Im sure it is the most comprehensive collection of it’s kind in the world and it is housed in a building (called the vault) apart from the museum. To say that it was memorable would be a gross understatement.

And for Jack a Mystic highlight included the trip to the Mystic Aquarium. The thing that I appreciated the most was that the collection was made up of either animals which are nearly extinct and they are breeding them in captivity or animals which were rescued with the goal of rehabilitation and release. When release was not possible, the animal remains at the aquarium as an ambassador. At every turn and as a part of each exhibit, the goal was to educate about ecology and the environment. We all found it to be an incredibly worthwhile trip and included 2 Beluga Whales (None of us had ever seen one) and South African Penguins (endangered and we have never seen them) We also saw poison dart frogs (on Jack’s bucket list believe it or not) and sharks – always a highlight for Jack. For a short stop – we never stopped! All of this and Alec and Jack managed to get the school work done each day. So you see why I haven’t gotten to the blog! We have had super fun filled days and have fallen into bed exhausted at the end of each one! 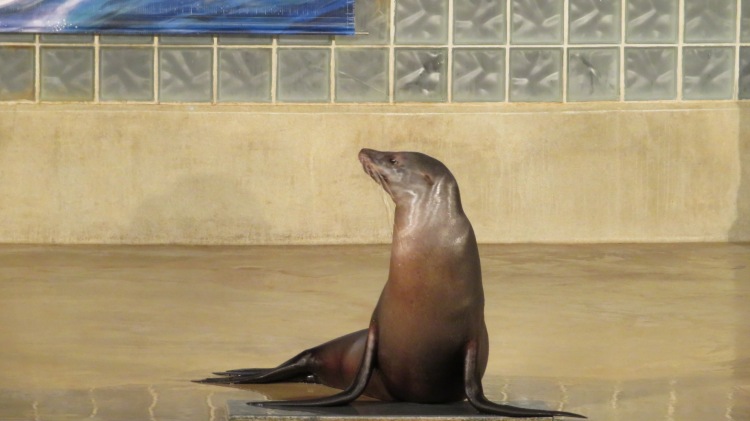 We are headed to the Chesapeake next but specifically where, we aren’t yet sure:-) We still have a couple of days travel before we get close so we have time to figure that our. One goal that we have is to take the train or bus to Washington DC for a couple of days and stay in a hotel to do some sightseeing. Since the trip on the boat would involve a couple of tough sea days traveling up the Potomac, we would rather just take the bus an hour and spend the time enjoying the city. More on that later though.