If you read the last post, you were probably expecting to see Prince Edward Island at the title of today’s post. One of the best things about this type of travel is that, on a whim and at the last minute, plans can be altered. In fact, holding too tightly to a plan when traveling in general but traveling by boat in particular, can have devastating consequences at the worst and at the least, will probably result in frustrated or exhausted crew mates. Going with the flow is essential. So when we got the call from the Bahamas that we would need one additional document notarized and certified, there is no way we could leave the province without having this taken care of. A certification is a document from the capital of the state or province in which you had a document notarized verifying that the person notarizing a document is authorized to do so. In our country this would likely have taken several weeks but in Halifax it only took 5 days the last time we were here. The sale of our property was to have closed on August 1 and dragging it out any longer could have very costly repercussions. So the decision was made that after PEI we would head back to Halifax for another week. Unfortunately, after discussing this with our buddy boat and sleeping on what this would mean for the overall timetable, it was decided that leaving PEI for another time would be more prudent. All decisions in life have an upside and a downside and this was just such a decision. While we missed seeing PEI, we did get a chance to enjoy the Bras d’Or lake and its many cuts and inlets. We were able explore by Kayak and dinghy and saw lots of eagles, a mink, seals (or otters), and we were able to do so in pristine conditions. Nova Scotia is well known for it’s fog outside of the lake but we had no such conditions during our entire stay in the Bras d’Or lakes region. It could not have been lovelier with near perfect temperatures and weather. We also had a chance to re-connect with other buddy boats Bluewater and Happy for another evening of cocktails and laughs.

Having gained the windfall of additional time, we decided to leave ourselves enough time to explore some of the anchorages and cities that we skipped heading East and what a windfall that was. Working our way to Halifax we stopped in Liscomb for what we thought would be just a night. After a 10 hour run in what we anticipated would benign conditions, we had a rather confused sea state with 2-4’ waves off the bow – ideal conditional for mal de mar (seasickness). Jack and I felt lousy the entire day. A perfect opportunity to re-valuate the timetable and make some adjustments. Upon arriving in Liscomb we anchored and called the “lodge” to make reservations for dinner. What a treat this place was! Not only did we enjoy one of the nicest and most delicious meals we have had in Nova Scotia, but we also discovered that there is a 10km (6 mile) trail along the river. This together with the wonderful kayak opportunities, we decided that there was no rush to press on. We ended up staying here for 3 days enjoying 2 delicious meals at the lodge, hiking the 6 mile trail – which was moderate intensity in places but stunning and well worth the effort. As we were walking up to dinner, the dock-master asked us if we had been to the town of Sherbrooke Village which is nearby. Of course we hadn’t and in such a remote area, we had no ability to rent a car. April (April K) not to be too subtle asked “how might one get there with no car?” to which Chester, the dock-master replied, why you would drive my car!. So we did in fact, borrow Chesters car and head to that 150 year old town. 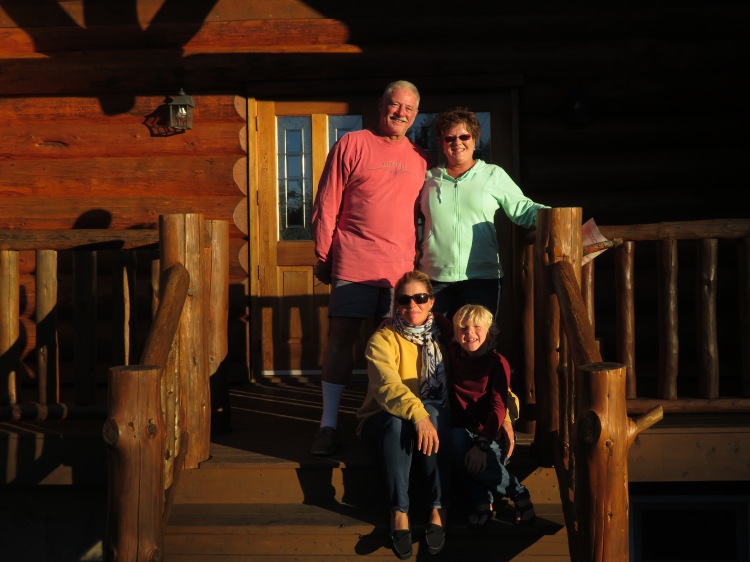 I remember vaguely going to Williamsburg, PA when I was a young child and I believe this was probably the same. What we loved about it was that we have been teaching Jack (and re-learning ourselves) so much history lately, and this helped to solidify those lessons. Since we just learned about Alexander Graham Bell, this little town represented the time of history in which he lived. Mostly this town aimed to replicate, as closely as possible, what life was like living in 1867 and they did so with authentic period dress and speaking to us in first person on many occasions inviting us to “play along” – which we did. Jack’s favorite stop was the blacksmith shop where we watched craftsmen make pot hangers, hooks etc. Jack inquired about the Blacksmith making swords (an idea borrowed I think from Pirates of the Caribbean) and the man said that he made them on the off season when he had time for longer bigger projects. My favorite stop was the printing shop where we saw a printing press from 1867 still in use making menus for the restaurant and she printed up recipes from her own family 8 generations prior. It was here that I got my pie crust recipe and the recipe for butterscotch pie. Believing as I do that things come to you at exactly the right moment, I took it as a sign that today would be the day to tackle my pie challenge. Not only did I find the recipe for a pie and crust, but later in our tour we came to the wood maker shop where I was able to purchase a pie dough roller. So, in one fell swoop, I was ready to tackle my summer challenge. 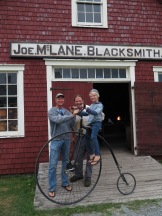 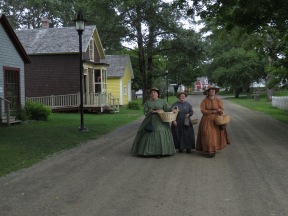 At the start of this trip, I asked Jack for 2 goals for the summer. He said he wanted to learn cursive and he wanted to master division. I am so proud to say that Jack mastered both of these goals that he set for himself. Unfortunately, the goal that I set for myself, to make a pie crust – something that I have tried and tried for years to accomplish, still had alluded me. I finally discovered why… about a month ago when doing to light research for my pie project, I discovered that if my equipment or kitchen ever got above 73 degrees F, I would have to cool everything down again. This information was extremely timely because that was clearly my problem with making a pie in Florida in the summer. There is rarely a time that our kitchen is ever below 80 degrees. So, on this day -so cool in Nova Scotia that we wore sweaters and foul weather gear, I decided today was the day. Jack and I, having returned from the Sherbrooke Village decided to get busy and make my goal a reality. Success! We both did it! 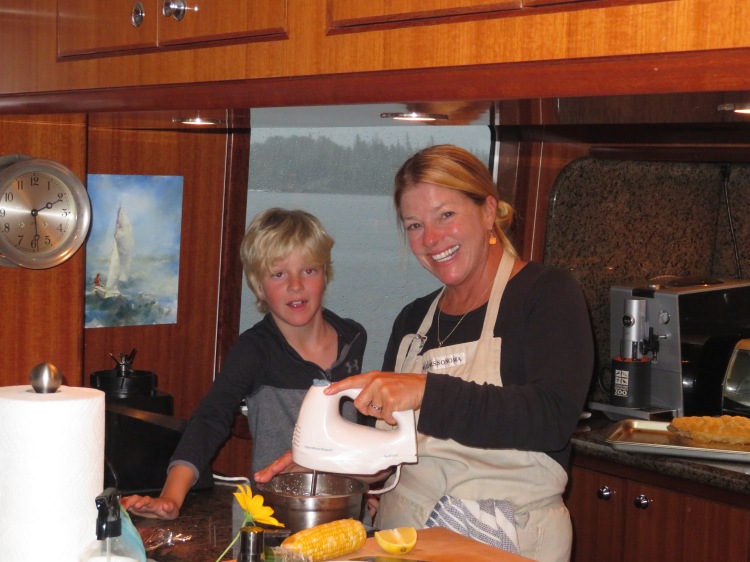 Another highlight of the week was Jack Face Timing his friends on the first day of school. Getting a signal was a challenge but we managed, however briefly, to connect, and Jack got to say hello to everyone for a few moments on Wednesday. So began Jack’s first day of school. Bridges Montessori provided us with some books and suggestions for study material and we have gotten busy putting it to use. We have done some work this summer to ease the transition into school time but we are trying to commit to doing this in earnest from this point forward. It really is harder than it looks finding the time to commit to school. One may think we have nothing but lazy days and time on our hands but our days are surprisingly full . I think that we are going to have to commit to less time underway and longer periods in each stop.

We are presently offshore traveling on a Southwesterly course approximately 65 miles East of Halifax. We are still undecided if we will anchor in one of the sheltered coves for the night or press on to Halifax for an arrival today – we are letting Mother Nature decide for us. If is is rough, we will tuck in for the night, and smooth sailing… we will press on.

Amanda and Adam, our new friends from Baddeck, live full time in Halifax and have graciously provided us with a ton of new discoveries to explore in Halifax so even though we are going to take care of this document, we will certainly avail ourselves of the “local view” of things on (as Amanda put it) Halifax 2.0. On our list is the art museum, the children’s book store (we have run out of books), and hopefully time spent with the Langley family.

We are still planning on a September 1 arrival (possibly a day or two on either side of that) for Maine.

Thats all for now!

3 thoughts on “Little Harbor, Liscombe and the Bras d’Or Lake”